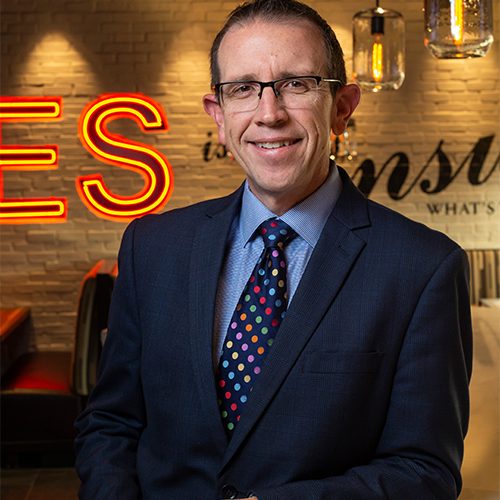 Kline’s enthusiasm for the kitchen started early. Growing up, holidays and family events always began in the kitchen – his grandmother, grandfather, mother and brother were all great cooks, and homemade meals always served as the centerpiece of family celebrations. At sixteen, he was making breads and entrees at Vincenzo’s an Italian restaurant in Columbus, Ohio.

Kline then completed a three-year apprenticeship at The Refectory in Columbus, Ohio under French Chef Richard Blondin. Kline graduated first in his class at Columbus State Community College, earning an Associates Degree in Hospitality Management. This was followed by two years’ service as Sous Chef under Chef Blondin whom he credits, along with Charlie Trotter, as his biggest mentor and influence.

Kline’s first assignment with CMR was menu development for the new Cap City Fine Diner & Bar concept in 1995. Hired as Sous Chef, he was quickly promoted to Executive Chef.

Kline says his favorite part of working with Cameron Mitchell is the freedom to run the business as if it were his own with his passion being the development and nurturing of teams. He’d like to emulate the legacy of his mentors – to assist each team member in achieving their goals. During his downtime, he enjoys spending time with family, attending OSU football games and fishing with friends. Reaching back to his early cooking roots, he says his all-time favorite Cameron Mitchell dish is the Chicken Picatta at Marcella’s Ristorante.