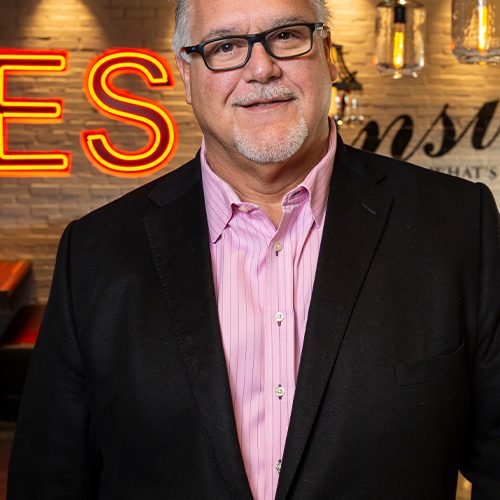 As President of Rusty Bucket Restaurant and Tavern, Gary Callicoat is a guy who doesn’t take himself too seriously—but when it comes to food, he’s about as serious as it gets.

“We make our menu from scratch because food just tastes better that way.” Callicoat explains. “Cooking is like a dark alley. Bad things happen when you take shortcuts.”

Callicoat is responsible for overseeing the steady growth and strategic direction of the Rusty Bucket brand, while maintaining a commitment to delivering the unique and beloved culture to Rusty Bucket associates. Gary believes that Bucket’s people are what makes the company successful and that the “Associates First” culture is what makes the company’s culture so powerful.

He began his restaurant career as a dishwasher at age 15, eventually ascending to managerial and operational roles in multiple restaurant companies, most notably with the 55 Restaurant Group and Cameron Mitchell Restaurants (CMR), both based in Columbus, Ohio. While serving as general manager of Martini Modern Italian restaurant in downtown Columbus, the concept for “Rusty Bucket” was born. It’d be a tavern—with a twist. Serving up fresh, American favorites and a huge beer selection, in an inspired, pub-like atmosphere.

Under Mitchell’s guidance, Gary opened the first Rusty Bucket Restaurant and Tavern (sister company of CMR) in the Columbus suburb of Dublin, Ohio in 2002. Since then, The Bucket has grown from a single restaurant to 23 locations in six states—and counting. And whether you come in to watch the game, host a business event in one of our private rooms, or bring the whole family for weekend brunch, The Bucket is your go-to gathering place.

“The Bucket is a place built on friendship, where people can meet up, grab a bite and a drink, and share stories. Everybody’s welcome here,” Gary says, “In fact, our regulars are the only thing regular about us.”

Reflecting a long record of giving back to the hospitality industry, Callicoat serves on the board of the Ohio Restaurant Association (ORA) and is equally committed to supporting charitable causes of the communities in which he does business. He is on also on the board of the ORA’s Education Foundation. Callicoat encourages and leads his team to give back in many ways with numerous activities throughout the year including raising funds and basic supplies for underprivileged school children, coat drives in the winter, and providing Thanksgiving meals to the Salvation Army, not to mention, partnering with organizations like Canines for Companions and Toys for Tots.

According to Gary, “Serving great food and giving back. That’s what the Bucket Life is all about.”