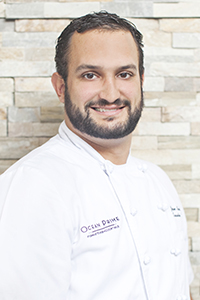 A fan of many cuisines, Executive Chef Jason Shelley’s passion for food adventure is the secret ingredient behind his success in multiple kitchens.  His travels include a year-long journey through Spain in between time spent with Ocean Prime.

His career started on the line at Atria’s – a popular neighborhood restaurant in his hometown of Pittsburgh, Pennsylvania.  He moved to Columbus, Ohio in 2004 to work the middle station then sous positions at Mitchell’s Ocean Club.

During his tenure, Mitchell’s Ocean Club was fine-tuned to launch in cities outside Columbus as Ocean Prime. Chef Shelley was tapped to open the Orlando, Atlanta and Philadelphia locations.

He is most proud of Ocean Prime’s scratch kitchen.  Everything is produced in-house allowing the team to maintain superior quality and take advantage of seasonal opportunities to enhance the menu.  His ‘heart of house’ team is readily able to adjust for guest preferences and dietary requests – a hallmark of the genuine hospitality focus of Ocean Prime.

For his next chapter, Chef Shelley is most excited about the international influences in the Washington, DC culinary scene.  They’re a great match for his personality and spirit.