Our talented Regional Chef Peter Chapman has been in the Cameron Mitchell family for 13 years. About five years ago, he was coping with one of the hazards of chef life – long days, eating on the run, his body playing a game of nutritional catch-up depending on when and what he chose to consume. He was forty pounds heavier than he is today. 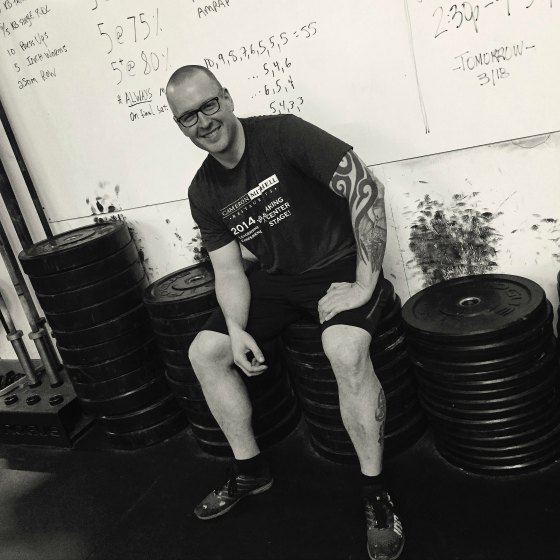 Tired of feeling tired, and hearing from others that he might want to explore gluten intolerance as a cause for his low energy, he got tested. The test was positive.

In a two week period, after dramatically altering his gluten intake and carefully tracking what and how much he was eating, he lost 20 pounds. The remaining 20 came off in a period of months and today he’s got a regimen that helps him excel at a demanding schedule in a world that is centered around food.

“I’m an emotional eater. If it’s in front of me, I’m likely to eat it just because it’s there and it’s something good. I’ve had to shift to self-monitoring and measuring what I consume while still allowing myself breaks in the routine to enjoy what I love.”

Chef Peter took up Crossfit when he hit the reset button on his food routine and appreciated the community spirit and supportive atmosphere. Now his athletic pursuits center around strength training. He still works out at the FTW Crossfit box three days a week though his focus is on ‘pushing numbers’ – working on building his body strength.

It’s clear when Chef Peter shares what he’s learned that he’s devoured as much as he can about maximizing body performance. For him, it’s science. By adjusting our intake of proteins, fats and carbohydrates, we can support or squander our hard-fought efforts. Eating like a champion primes our performance. Ignoring the ratios can leave us gasping long before the finish line.

So how can a runner Eat Like A Champion?

When there’s not a race around the corner, Chef Peter says an equal balance of protein, fat and carbohydrates is key to sustainable performance.

A casual runner who does a solid 5K a few times a week doesn’t hit the glycogen depletion point long-distance runners hit when they’ve been on the road for three hours straight. For casual runners, the recommendation is: no dramatic shifts in eating habits the day before a race.

Marathon runners have a different regimen. They’ve been ramping up their carbohydrate intake for about a week before the race. The night before, they’re at about 2 – 3 times their normal carb load. A pre-race evening meal is likely a three-course carbohydrate load of rice, pasta and potatoes.

Chef Peter is an inspiration to our team. It’s no small feat to adopt and maintain a new way of enjoying food in a world where there is always something tempting to create and sample. He’s proud of our commitment to delivering menus in support of our gluten-sensitive guests. In his words, “We’re in this business to take care of people. It only makes sense that we would seek to provide people with safe, delicious ways to stay healthy.”